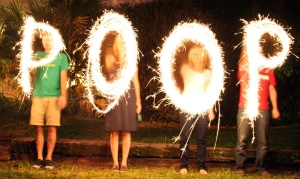 There they were, waiting for me on the changing table as I carried my squeaky clean V from the tub back to his bedroom…

Not only nuggets, but an open dirty diaper.

….flashback to a few hours earlier….

On my way home, I called M for a quick chat.

“How was your day?”, I asked as I gunned it down the expressway.

“I am in the middle of doing something horrible……”

This is parent code for ‘loaded up the pants’, ‘made a brownie’, ‘dropped the kids off at the pool’ or any number of other expressions (that I am sure your husband/brother/male member of the family will be happy to share with you, while they snicker that is…)

Oh men, so dramatic. You’d think it was the end of the world.

It must have been though, if I was to find remnants of it an hour later. Apparently it was epic. And there was screaming and thrashing involved during changing time. Good stuff.

I was sure. So sure. That life was not going to throw feces at me tonight. All signs pointed to a ‘dodge’, especially considering the previous conversation with M.

I picked that poop up, deposited it elsewhere and snuggled that Little Man within an inch of his poop-filled life….