Tag Archives: my child sits in the fridge 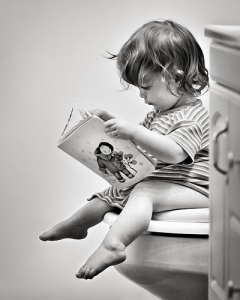 You know how sometimes you immediately regret what you just did?

Like perhaps  talking about ‘male parts’ in a hardware store. Or letting your very small dog sleep with you in bed. Now that’s the only place he will sleep at night. Or letting said small dog bully you and your husband into not hugging or kissing in sight of that dog. He barks until we stop.

M has nicknamed him the ‘cockblocker’.

I am sure you have you list of regrets. I know there are more on my list, those were just a few to tease you with.

V’s introduction to the ability to make the toilet make items go ‘bye-bye’. What was I thinking!

Actually, what I was thinking was that I would try and get him more interested in the potty. I sit him on it naked after the bath (for 2 seconds and whisk him off before he gets squirmy). So I thought I would combine that with taking a little piece of toilet paper, crumpling it up  and flushing it ‘bye-bye!’. I might be the stupidest person in the world.

I might as well have taught him how to start the car.

We had a can of whipping cream in the fridge from Thanksgiving. Now I am a sucker for things like that. I have been known to stand in the open door of the fridge and fill my open mouth with it. Yum.

So, the other day while V was sitting in the fridge (just ignore that part of the sentence), I grabbed the can and squirted some in my mouth. He looked up at me with a curious expression.

Without even thinking, I bent down with the can. He immediately opened his mouth (just like a baby bird) and I squirted some whipping cream right in there.

The look of surprise was just priceless. Followed by a look of delight. Followed by a small moment of panic when I thought I heard M coming down the stairs. How can I explain V sitting in the fridge with a mouth full of whipped cream and me red-handed with the can?

Anyways, happily he did not appear.

V and I hung out in the fridge for a little while longer. A few more little squirts of whipped cream, several delighted and messy grins from my Little Man.

And now an unending fascination with the whipping cream can, its bright red lid and the bottom shelf in the fridge where the can lives.

Maybe I should move it? Nah… then he wouldn’t sit in the fridge anymore…

Tagged as Awesome!, health, Mad skills, my child sits in the fridge, parenting, pee, potty, potty training, The South, Toddlers, what the?, whipped cream, why did I do that