Tag Archives: I am an adult honestly 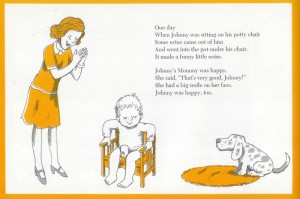 Let me just say that my day was a huge poop. A giant turd. This does not, in any way, mean it was enjoyable or felt relieving.

Ugh. It was an awful day.

But then I picked up V. And man was he happy to see me.

“Dis MY Mummy,” he announced to his teachers that I see every day. I said ‘hi’, we chatted.

What followed with them was a huge conversation regarding potty-training and how it’s going to be super enforced as of February. Which is tomorrow, in case you were wondering. I packed a special pack of Thomas the Tank Engine underwear this evening and am thinking this might be the magic key.

In case you wanted to know more about my life, I will be doing a lot of laundry these next few months and will become immune to the smell of urine.

So buoyed by that chat with the teachers, we headed upstairs for a bath and some potty time. And we were on the potty for quite a while. We read two books about going potty. V told me repeatedly “Mummy!! I did it!!!” He did nothing. Nothing went in there, despite him telling me repeatedly that he ‘did it’. Whatever it was. Neither of those things were in there.

Imagine. V, naked, sitting on the potty. The tub full of bubbles next to us, just waiting.

Little legs kicking back and forth, he pointed to that part that I am expecting some pee action from and states rather solemnly “Mummy, dis my bum-bum”.

I burst out laughing. “No honey, that’s not your bum-bum. That’s your pee-pee. Hmm, no that’s your PENIS”.

“No Mummy, dats not my weenus, that’s my deek”.

And then? I did a huge double-take. Did he just say ‘dick’ like a two year old does? Is that what I heard? That’s honestly what I thought I heard.

He looked like he said something a bit naughty too. He giggled when saying it, and shot me a sly look. A sly look from V is like normal around here, but since it came with a potentially bad word… double suspicious.

I corrected him and told him it was his penis again. Which felt like just the weirdest word ever to say to a 2 1/2 year old. Any of those words are just weird. All of them are. I don’t ever want to have to say any of them to my child ever. Ack!!

Maybe I’ll tough up as I get older? Please say I will. PLEASE. Please…

Tagged as I am an adult honestly, I am not afraid to use these words, pee, penis, poop, potty time, potty training