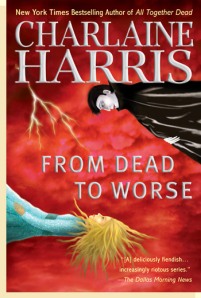 This is a really sad confession that I have to make to ya’ll… The reason that I haven’t been blogging much the last week and a half is that I have had to get something out of my system. And it’s a really sad something too. Something that I am pretty sure that at least one of my cousins will pee her pants laughing at (after the look of utter disdain she gives me).

It’s Vampires. Or Vampyres. Either one.

I got the whole Twilight thing out of my system last year. Very enjoyable.

Then, after discovering True Blood on HBO, I hit the Sookie Stackhouse series hard, barely coming up for air in-between books. Now that was a delicious, explicitly sexy trip.

Then I took a bit of a break.

And then, 2 weeks ago, I got right back on the bus.

I picked up the first 2 books in the Morganville Vampire series. And 1 1/2 days later, I finished them.

And then I wasn’t anywhere near a proper book store for about a week. So, I headed back to Target and check out their book section again. There just happens to be one about 1/2 a block from my office, so I dashed in on my lunch break and dashed out with the first book in the House of Night series.

Geez. That was a brutal 6 days where I literally read one book a day. It had gone viral. I had  no resistance.

And I knew it had gotten really bad when I went to get tacos last week at Tijuana Flats and the most chipper and super genki-est, too cheerful girl at the counter applauded when she saw what I was reading. Told me it was the best ever. And then got so excited, she had to run to her purse and show me what she was reading right now. And I recognized the book cover. From Target.

Hey, so guess where I went the next day? Target. I got the first book. Read it. Got the second book, just finished it and picked up the third. So this is what I am reading right now. I am out of control.

M keeps saying things like “You know, there are such things as libraries”.

Well yeah. Of course there are. But you know what? I am obsessed. AND I am a pain in the ass. AND, well, I am apparently also about 17 years old and obsessed with vampires. Or Vampyres.

It’s just a phase right? Like Big Band music from the 90’s and Swing Dancing? Emo music? (or is that still going on?)

Well, I have to go and read The Dragon Heir now. I have to get it all out and then our house can return to normalcy. Really. Please wish me godspeed in reading…