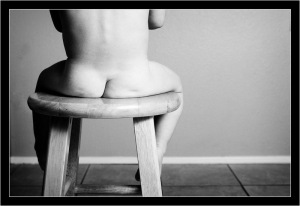 And then a little back story so it all makes sense.

So this month started off a hard potty push. Did you know it was February? Well, it is and the potty storm starts now.

Yesterday I was instructed to bring more long pants, underwear and another pack of pull-ups. And to prepare myself for the fact that he will be in underwear only for half the day, to see how he does and to help make him aware of how it actually feels.

I haven’t had time to do that thing that Mummies with freetime do in magazines when they let their kids run naked and just pee freely so they can ‘feel’ it. Damn you Mums with free time!

So we are letting him start with a half day in underwear and then hopefully things will just go from there.

Which is where they were today. He was in diapers this morning and briefs this afternoon. Those briefs got soaked about 30 minutes before I picked him up and he wanted nothing to do with them. Or cleaning up.

“Ms Bellysol, my bum-bum get a wet. You change it? My bum-bum?” he told them.

“Your bum-bum?! Who told you it was your bum-bum?, said Ms Belloysol.

“My  Mummy told a me dis my bumbum,” he said solemnly.

And then his teachers apparently laughed at me. They had never heard that expression before. It made me feel very Canadian. Not that that is what we all go around saying but… well, isn’t it that what you call it when you are 2? In Canada?

Am I Robin Sparkling myself?

Anyways, V’s ‘bumbum’ got ‘a wet’, he got changed and then that was the end of day one of serious, hardcore, totally bad-ass potty training…