Shark bites (or Adventures in Dermatology) 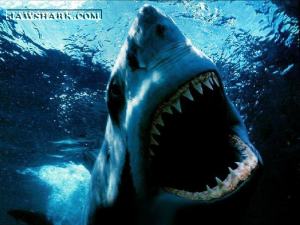 As the Dermatologist headed towards her, Jaime felt a sudden apprehension...

Don’t worry, I haven’t gone anywhere. You were worried, right? I thought so…

Biggest thing has been my exciting trip to the dermatologists a few weeks ago. What I thought was just going to be a quick trip for a refill on meds turned into a full-blown skin check. And that ended in the doctor saying to me “Well, I think I’m going to biopsy this one. And…. this one over here. And this one. And then just this last one. Ok?”

No harm in being proactive regarding your skin especially when you live in Florida and it’s hot as Hades 9 of the 12 months of the year.

A few days later I got a call at work from the dermatologist’s assistant, who said the following “Do you have a moment to go over your results?”

This is medical speak for ‘it’s bad’.

And not that it was really that bad. But it wasn’t like they were calling me to tell me “We just wanted to let you know that your skin is PERFECT! The most perfect we have ever seen! And below the surface? You are made completely of angel dust and gold sparkles!”

In reality, it was 3 abnormal areas, with the potential to possibly develop into something worse given time. And removal was what was suggested. And I agreed.

First spot to go was on my hip. Didn’t feel a thing. I got an enormous bandage that sort of looked like perhaps a rabid animal had bitten me. Maybe even a shark. I was an enormous baby by the end of the first day. But, the following day it was fine. I removed the giant bandage and replaced it with a little teeny one. I skipped the gym for a few days, haven’t been swimming in 2 weeks and have been going through hydrogen peroxide like it’s going out of style.

Monday, site 2 is removed. Right below my collar-bone. Shark bite take 2! I wonder how enormous the bandage will be this time?? Hopefully people will take pity on my Tuesday at work and bring me cookies (Jen, I’ll be in Winter Park that day, ok??).

Third site will be on the back of my right arm and will be removed in two more weeks, when I go in to have the stitches removed from the site on my chest.

This is just one of the ridiculous things that are going on in my life right now… Thrilling, is it not?

So I am still here. Giant shark bite and all…