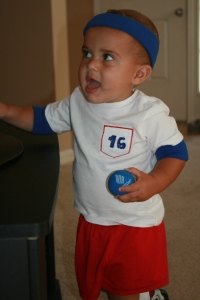 Post-Halloween over here, and the dog and I are chilling…

V was a marathon runner this year. Costume choice was decided last year and at that time was based on the fact that babies look cute in shoes. About one month ago, V learned to walk and so the costume suddenly became a way better one. How funny to see little man dressed up as if he is about to do a runner and then it watch him do one down the sidewalk!

I thought it would be hilarious…

It was. When I ever thought a headband would stay on his little head, lord only knew… But for the 30 seconds it was on, it looked awesome.

7 pm and little man was in bed. Tuckered out from the excitement of the evening. He got 5 pieces of candy (that I will eat for him).

I feel weird about giving my child candy. Apparently, I have no problem giving other peoples kids treats (as illustrated by the way I thrust it upon those trick-or-treaters), but I had a hard time even giving V a lollipop. It just seems wrong… Cupcake (that I have made for him), yes. Laffy taffy, no….

I proceeded to get knocks on the door until 9:30, despite an apparent strict policy  regarding front porch lights being on (indicating that you are participating). I turned mine off at 7:15, when I was about to run out of candy. Just as my mother-in-law left and I let the dog loose again.

Poor Chewie, barking his face off upstairs, locked in a room. The second I let him out, he became uber guard dog.

He is a chihuahua. And rather self-important.

Thank you Chewie for providing me with an excuse to not answer the door after 7:30.