“Happy Mother’s Day! I filled this diaper just for you!”

Mother’s Day is, I feel, the equivalent of Valentine’s Day. Another one of those ‘manufactured holidays’ hyped by card companies to generate revenue. And also, I need to chime in on that Time cover too. Just like everyone else! I know you want to read all about it. Seriously. You do.

END_OF_DOCUMENT_TOKEN_TO_BE_REPLACED

I know she only has one arm... sometimes the Ladies room is just that dangerous...

Things I did today for the first time….

Got poop stuck under one of my fingernails. And no, it was not mine. In 17 months, this was the first time it has happened. How it hasn’t, no idea…. however, lately he has become extremely thrashy. Like his father, mid-90’s. So genetics. Ya. Thanks M, for passing that genetic gift on.

I also took V into the Ladies Room with me today. Why I thought this would be a brilliant idea? Not sure… But I had to go to the bathroom and we were about to hit up a long drive. Luckily no-one was in the room when we entered and it stayed that way the whole time we were in there.

The moment his feet hit the floor of the stall, he turned around and those little fingers went right for the latch. Oh the fast mind of a mother…. “Ooooh, look honey…. toilet paper! On a roll! Oooooooh! Look! We can keep pulling and pulling and pulling it…..”

And that’s how he kept himself occupied the whole time we were in there. And then we washed our hands. With soap. All wet, freshly washed hands go directly down the front of Mummy’s shirts and into her bras.

And then there was the first time I said ‘NO!!’ in a very strong manner to Little Man. And then he laughed at me. Actually, he laughed so much, that he fell down on the ground and proceeded to keep giggling.

I even pulled out all of the stops with a full-on first, middle and last name firm, warning-like tone.

He kept laughing at me.

And then he hit his head on  the exact thing that I was trying to steer him away from. Which was the TV stand, in case you were wondering. That stand and all of its wires are truly a beacon to all men.

But since we are not really at a communicating stage yet, he didn’t listen to my logic and kept crying.

And I can’t handle it. So I scooped him up, gave him a cuddle and that crying stopped in…oh…2 seconds….

Damn it! So screwed over here… need more skills to deal with toddlers.

PS… All of these lovely occurrences happened today… just an fyi… 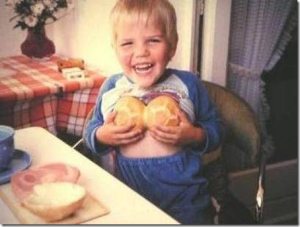 Pointing at my chest, more like poking me in the breasts (gawd, I hate writing ‘breast’, makes me feel like I am a guidance counselor and have a group of teens giggling at me)…anyways, he pokes me in the ‘breasts’ and exclaims ‘Mumma!’. And then he pulls my shirt out and takes a peek down it. And after he’s done that, he looks up at me and grins in the hugest way…

My first reaction? Laughter… Because FOR REAL, how else do you react to something like that?!

That is followed by… ummm…not sure what…blank? Awkward grin? A wtf face?

It WAS rather funny. And now it’s moved into a pattern of, say, all the time. Which I guess, in hindsight, is not really a pattern at all. More of a regular event. A daily event actually.

As are the other things, and you parents of boys know exactly what I mean. And I can sum it all up with the phrase “It starts early and never ends”. And I mean it. And then, for you non-boy parents, I will throw in the phrase ‘bits’, ‘adjusting’ and ”touching’. Is it clear? Have you ever met a man? Talked with one? Perhaps lived with one?

It is the beginning of man. With each day passing, I understand my husband of almost 5 years just a little bit more. Watching a baby grow into a toddler and into a boy and then into a man…. well it’s basically the evolution of ‘man’ itself.

The breast obsession/hype, followed by the penis obsession.

Oh son of mine, you will not read this for many, many a year. Thank you for the  inspiration…