Please save us from poo… 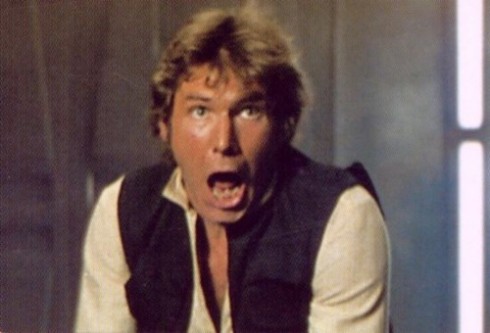 Yup, that's pretty much how I felt about it too...

So yesterday morning started off on a good note. It was the last day of Spring Break for Edward and we had a family day planned. Vince was not going to daycare and we were all going to try and sleep just a little later than we normally do, you know, for fun.

Edward and I woke up to Eleanor’s noisy morning cries and I busied myself with feeding her. Edward interjected just before I got started with “Did you want me to feed her and you handle Vince? Or what’s the easiest for you?’ (Bless him, he’s trying to help). I shook my head no and indicated that I would prefer him to handle Vince. Total non-verbal communication-style. Yup, that’s how good our marriage is. I grunt and he translates that to complete sentences and vice versa…

Anyways, Edward headed off down the hall to wrangle the boy-beast. And about 3 seconds after he left, I heard ‘Oh my dear, sweet lord’. And then I heard the following sentences uttered about 12 times in quick succession “Vince, don’t move. Don’t move. DON”T MOVE.’

Since I was pleasantly trapped with Eleanor on my lap, I could only wonder what the hell was going on.

And as it turned out, it honestly was nothing that my mind could have dreamed up at that very moment. Mainly because it was the most awful thing you could possibly imagine. And maybe the grossest too. Ok, totally the grossest. The grossest ever. And praise the lord I didn’t have to deal with it!! Bahahahahahaha….

So I guess because we had slept in just a teensiest bit longer, Vince pooped his pants. Probably I should say loaded his pants, because that’s what he really did. And then I should add smeared it all around, because this was also done. I should also say that he sleeps in what we refer to as ‘night-night diapers’, which typically contains these incidences when they occur, leading me to wonder what on earth happened in there Thursday night.

I never entered the room. Edward did three loads of laundry. Every single toy in his bed was covered in poo and Vince went from his bed straight to his bathtub because he was encrusted with feces.

When Vince was younger, he climbed out of his crib at such a young age that we had to transition him to a bed a lot earlier than we planned to. We had a terribly hard time getting him to stay in his room and bed in the evening and ended up putting a child-proof door knob cover on the inside of his room to stop him from leaving. (Yes yes, I know… judge away. I’m a terrible parent…blah blah blah…)

Well, I guess it worked so well in terms of training him that he literally will not leave his bed once he’s woken up. Or his room. and we are having a devil of a time training him to go potty at night or in the morning.

And a devil of a time getting him out of his room. We’ve discussed it to death with him, about how it’s ok to leave his room. How it’s ok to go potty at night. How he can come and wake up Mummy and Daddy if he needs to.

But if you talk to him, he will recite (in detail) all of the things that he needs to do to prevent a wet bed or a poop diaper. It’s just endlessly frustrating. And now, in light of Friday mornings poocidence, we are just grasping at straws over here. After much discussion yesterday, Edward and I decided that we were going to try and wake Vince up early, have him go potty, then put him back to bed. My mother swears this works. Apparently it worked with me as a child.

Vince? Yeah, not so much.

“Daddy? I need pants.” “No buddy, let’s skip them tonight.” “DADDY!! I NEED PANTS!” “Buddy, ok ok, lets get pants. And let’s be quiet, Mummy and Ella are sleeping. These pants ok?” “No, I want dees pants.” *sigh* “Ok,…. (puts on pants)…. ok, let’s get into Mummy and Daddy’s bed.” Brief interlude of silence, followed by non-stop leg-thudding against the mattress with periods of thrashing. No sleep at all for all parties involved. Then, suddenly, the sounds of stifled crying” “Buddy, what’s wrong?” “Mummy, I have to go potty.” “Ok, let’s go…. (goes potty) Alright, back to bed!” “I need to water dees plants in my bathroom.” “Let’s do that tomorrow” “I NEED TO WATER MY PLANTS! *sniffs… begins crying* (Mummy sighs dramatically) “Ok, fine (waters plants)… now back to bed”.

And on the way back to bed, Vince fake-fell and then pretended to have an owie, which needed a bandaid. Although, not the bandaid I selected apparently. That bandaid caused instant tears. So we had to head back to the bathroom to get the bandaid he selected. And once that was done, he asked me “Mummy, where is my owie?” (You know that one he pretended to have a few minutes ago?) And so we had to look for a fake owie to put this darn bandaid on. And when I tried to get him back into bed, he started crying. So we went downstairs, I made him breakfast, put on a movie and fell asleep on the couch while he watched. Edward woke me up an hour later.

All because we woke him up early to try and avoid another poocident. It was like punishment!

Tonight we are going to try again, but not at 5:30 am like this morning. More like 12 am or 1 am or so. Chances should be better for Vince going back to sleep in his own bed and not wanting to, you know, water plants or something else ridiculous.

Any tips from Mums out there that cracked the nighttime potty training issue? I welcome any and all suggestions!

Fingers crossed for a disaster-free evening…

2 responses to “Please save us from poo…”