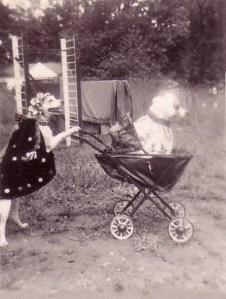 We moved across town.

It was a typical move. The movers were late… although when I called them to ask when they were arriving, apparently it was in ‘the window’, which meant that, in fact, they were not late. Rather, they were on time. That’s OK. I had only been awake since 5 am, so anyone would have been late compared to me.

The cable guy was 3 1/2 hours late. He arrived (after numerous phone calls on my part as to his arrival time) just after we sat down for Chinese food around 8 pm. His ‘window’ was 2pm to 4pm. Bastard.

He ruined these satisfying thoughts of BrightHouse being bastards by being the nicest man ever. And funniest. And most efficient. And then made random slightly off-colour jokes about himself being a nice bit of ‘chocolate’ that our dog wanted to nibble on…. I know, right? I was thinking ‘What the hell” too…. But it made me laugh.

And amidst all of this chaos, V decided that it was the perfect time to pick walking as a full-time career choice.

Way to make a great decision! His timing clearly comes from me.

And man, is it the funniest thing ever. He walks all around with his hands up in the air like he is about to start ‘the wave’ or something. Most of this happens with a very serious face as well.

Very serious. Mostly sans shoes, mostly with Chewie following closely behind (dog-toy firmly clamped in mouth to prevent V from grabbing). I think he noticed that he was taller while walking. Now, he likes to walk over to tables and reach for what is on top, drag it off and then walk all over it. He sure can show that mail-keys-handbag-etc who’s boss!

This evening V and I took the dog for a walk.

We both put on our shoes. Some with a little more help than others.

We walked together (v in his little Transformer shoes, me in my flip-flops) down to the corner and across the street. And then about half-way down that street. This journey took about 20 minutes. I laughed a lot.

Usually I throw my ‘nonchalance’ cloak on every time I step out in public with V. It is quite an effective coverage…

Anyways, we went 1 block (and back). We investigated a lot. We waved our hands up in the air. A few little yellow petals bit the dust with our overenthusiastic over-handling. Shrieks of happiness echoed up and down our new street.

Walking, apparently, has hit the big time over here.