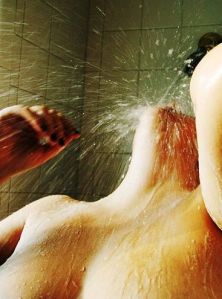 Me, earlier during my epic Monday shower....

Its been a while since I posted about poop.

Happily , our household has been free of poop-related incidences. For a while there they were happening a little too frequently for my taste.

Don’t fret my dears…. I am here with a brand-new one for your reading pleasure!!

Mondays can be long days. This Monday felt extra long. Hectic work, plus M’s teacher ‘back-to-school’ week, plus a sudden disappearance of our regular daycare resulting in Pop-Pop and V spending a lot of time together. PLUS an earlier rising time, minus my glorious 8 weeks of sleeping in until 6:30 (practically unheard of!). Plus the fact that it is Monday.

This resulted in me feeling like I forgot to have a shower by the end of the day. Isn’t that just the worst feeling ever? The humidity doesn’t help either. So as I am driving the Expressway home I am contemplating a dilemma…shower or Gym, shower or Gym, steamy long hot shower with coconut body wash and clean hair or Gym.

The shower won. It was delicious…. out I came, clean hair, body delicately scented like coconut and so so so very clean.

That shower put me in the best mood. M and V came home from picking up dinner stuff and Little Man was scooped up into my arms, snuggled within an inch of his life and then fed some yummy dinner. Tonight’s meal: Oven Gold Boars Head turkey, Organic cheddar cheese, sauteed zucchini and mushrooms and sweet potato french fries. Fresh watermelon for dessert.

Post dinner, off we headed to the bedroom for a strip-down and a plunk in the tub. Who knew that my leisurely evening was about to come to an end!

I played games with V as I stripped him down to his diaper on the changing table. An aroma arose from the groinal region that immediately exited the room and headed for the kitchen to assault M’s nostrils. “Jame!! What’s that smell?!?! It’s awful!!” he shouted from the other room.

“M! V’s got a present for you!! But you have to come in here to get it!” I shouted back…. he did not fall for that old trick… neither would I.

I opened that diaper and encountered the foulest thing ever seen in a  diaper in the history of Mankind. Also the foulest smelling thing. Foul.

Not to V though!! He shrieked with delight and happily stuffed both hands down that diaper and went straight for the bits. Which were covered. That’s how awful this diaper was. It was a full-on “Strap your child to the changing table and use both hands” kind of clean up.

Oh. My. God. His hands were covered in poo and he was laughing hysterically. He was having the best time ever!! I, on the other hand, was freaking out. And screaming things like “NANANANANANANA! V!!!!!! Nonononono! Oh my god, oh god…. oh holy god….etc etc”.

M, was happily (pretend) oblivious in the kitchen. He states he heard nothing. Bastard.

Anyways, off we went at arms length to the tub. The one time I didn’t want to cradle that little bum while I walk him naked as a jaybird (him, not me) over to the tub and dunk him in. I did not want to touch that part of his body.

What follows was fastest bath in the history of the human race. It might have even been faster than the previous fastest bath (that one that followed the infamous ‘poop in tub’ incident).

Bedtime followed at an even faster pace!

One response to “Shower”